During the first 130 years of Princeton’s history, student dining options ranged from inadequate to nonexistent. Indeed, after Nassau Hall burned in 1856, the College offered no food service at all, leaving students to form their own cooperative eating groups, often colorfully named: Old Hickory, The Autocrats, Sprinklings of Ceres.

National fraternities came to Princeton in the 1840s, and they were not welcomed by President John Maclean. James McCosh, who became president of Princeton in 1868, fought the Greek societies, vowing that they would be abolished or he would resign. McCosh won, and he established a new refectory as an alternative to the informal eating groups and the local boarding houses that hosted many of them and accommodated most undergraduates, whether or not they were members of the eating groups. 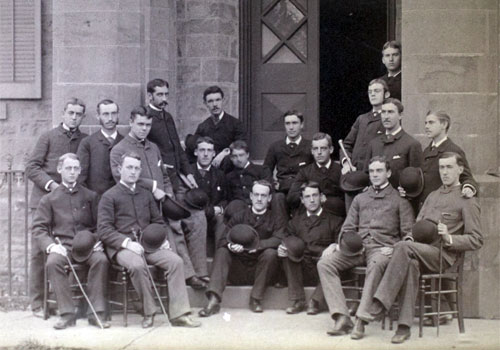 The college dining hall, or commons, was the place where a congenial group from the Class of 1880 had gotten to know each other as freshmen. They returned to commons as sophomores in the fall of 1877, but their stay was short-lived. The exact circumstances are shrouded in myth and speculation (some of which, probably apocryphal, involved airborne chicken croquettes). In any event, the students offended the dignity of the manager to the point where they were asked to leave.

Fortunately for this group of thirteen, their friend Gist Blair ‘80 and two of his classmates were tenants at Ivy Hall, a small building which still stands on Mercer Street, a few steps from the campus. Ivy Hall had been built in 1846 to house Princeton’s law school, but the school was discontinued for lack of students. An emergency meeting was convened, and this stalwart group of sixteen was inspired by necessity to “buy a stove, hire a cook, and set up a table.” Blair obtained the blessing of their landlady, and soon the west front room of the building was home to the Ivy Hall Eating Club.

They did not intend to create an institution that would survive their college years. But the men of Ivy Hall had nonetheless put in place the elements that would make their club much more like the eating clubs of the twentieth century than the informal groups of old: the club was independently controlled and operated by and for the members, who were responsible for its premises and services. Thus were sown the seeds of the Prospect Avenue clubs that followed.

In the autumn of 1879, not all of the original members returned to college. Fortuitously, the vacant east room, and as Blair recalled, “a most attractive group … willing to join” combined as catalysts for the next Ivy section. During the winter of 1879-1880, eleven men of the Class of 1881 walked down Mercer Street and were served by Henry Campbell, Ivy’s first Steward, at a long wooden table in the east room, joining, as new members of Ivy Hall, the seniors who dined in the west room. The first permanent Princeton eating club was born.